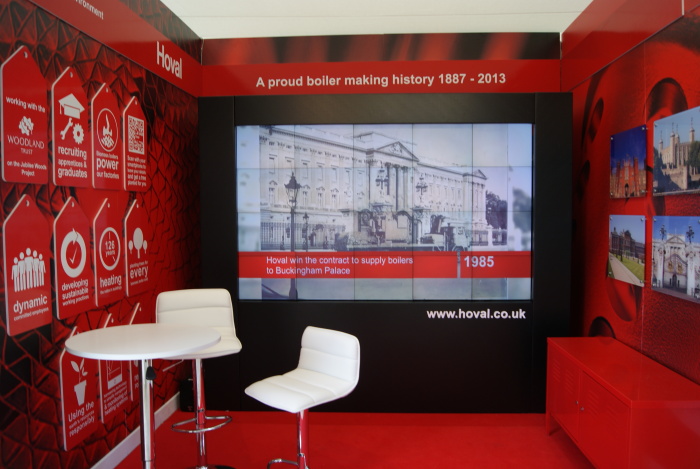 From the 11th to 14th July Hoval took part in the Coronation Festival, one of a number of celebrations to mark the 60th anniversary of the coronation of HM Queen Elizabeth. Held in the magnificent gardens of Buckingham Palace, the Festival brought together – for the first time on such a grand scale – over 200 companies that hold Royal Warrants.

For Hoval, holders of the Royal Warrant as Boiler Manufacturers and Engineers to HM The Queen, this was a major event that required precise planning to ensure success. As things turned out, it was very much worth the effort.

A key challenge for the marketing team was the nature of the event itself. Unlike the trade-specific shows Hoval normally attends, the audience for the Coronation Festival comprised members of the general public. It was therefore essential that the stand, located in the Design & Technology area, reflect this in the information on display.

The 17 staff who would be attending underwent training to ensure they could answer the types of questions they were likely to be asked by visitors who potentially were not familiar with the Hoval name. These covered topics as diverse as the history of Hoval and its forerunner Farrar in the UK, biomass heating and the company’s Corporate Social Responsibility commitments.

Eventually, after months of preparation, everything was in place and the Festival opened with a Royal preview, attended by HM The Queen and members of her family as well as selected nobles and other guests. During the following days some 36,000 visitors explored the exhibitor marquees, enjoyed the live entertainment and indulged themselves in fine food and drink.

Adrian Walker, Managing Director of Hoval Ltd, recalled: “There was a great deal of interest in our display, and for a variety of reasons. The history of the company, and the visual display of boilers, solar thermal and heat recovery exchangers being manufactured were clearly of interest to people, as was our commitment to training apprentices and recruiting graduates.”

Visitors to the stand were also invited to leave their contact details, encouraged by Hoval’s pledge to plant a tree for everyone who did so. Hoval is a supporter of the Woodland Trust’s Jubilee Woods project, which aims to plant six million trees across the UK.

Adrian Walker concluded: “This was a great event to be part of, and a great opportunity to demonstrate Hoval’s expertise and philosophy to a wider audience.”

Please watch this special video charting the history of Hoval and Farrar, as seen by thousands at the Queen’s Coronation Festival 2013 in the Gardens of Buckingham Palace.

A cookie is a small piece of text sent to your browser by a website that you visit. It helps the website to remember information about your visit, like your preferred language and other settings. That can make your next visit easier and the site more useful to you. Cookies play an important role. Without them, using the web would be a much more frustrating experience.

Cookies help us deliver our services. By using our services, you agree to our use of cookies. END_OF_DOCUMENT_TOKEN_TO_BE_REPLACED